How to land a paraglider? 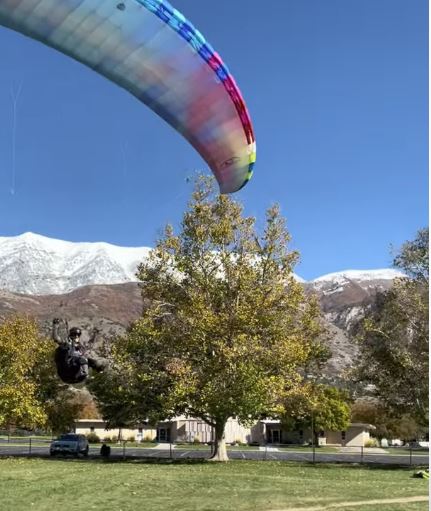 How to land a paraglider?

Landing a paraglider can seem like a daunting task, but with a bit of practice, it can be easy. Paragliding is a wonderful sport. In this article, we’ve broken down the steps you need to take to make a safe paragliding approach, final approach, and landing.

There are a few things you need to take into account when landing a paraglider. One of the most important things is your landing setup. This includes your speed, altitude, and position relative to the landing zone.

Your speed is important because you don’t want to land too fast or too slow. If you’re going too fast, you’ll have a hard time controlling your descent and may end overshooting the landing zone. If you’re going too slow, you’ll run the risk of sinking out and ending up shorting your target.

Your altitude is also important. You don’t want to be too high or too low when landing. Again, if you’re too high, you’ll need to bleed off altitude to reach the ground. If you’re too low, you will probably find mechanical objects near the landing zone.

Wind speed and direction on approach

When landing a paraglider, it’s important to take wind direction into account. If the wind is blowing from the side, it can cause the paraglider to drift towards obstacles or other hazards.

If the wind is blowing from behind, it can push the paraglider too fast and make it difficult to control. Avoid downwind landings, as the glider will be traveling faster than you can run to decelerate the wing. In either case, it’s important to adjust your landing approach accordingly.

Ideally, you want to land into the wind, as this will help to slow you down and give you more control over your descent. However, sometimes the wind does not align with the landing zone.

If the wind is blowing in the wrong direction, from behind you, it can make landing difficult or even dangerous. To land safely, you’ll need to know how to read wind direction and use it to your advantage.

There are a few different ways to determine wind direction. One way is to look at the flags at the landing zone, on top of buildings, or if there is a lake or pond nearby, study the direction of the boats and ripples on the water. Typically, we rely on the windsock in the landing zone, unless there is no windsock.

Another way to measure wind direction is by using an anemometer or a check your GPS ground speed. This is a device that measures wind speed and direction. Measure your upwind legs vs your downwind legs. This will give you an indication of the prominent direction and help you understand if there is a tailwind.

Extend the upwind or downwind leg as you begin to descend. This allows you to dial in your landing.

You will begin by slowly losing altitude until you reach about 100 feet above the ground. From here, you can make your last turn into the landing zone. Do not make your last turn under 100 feet as you will lose too much altitude. Square up your glider with the center of the runway and prepare to land.

The boxed approach pattern typically requires some altitude adjustment. If you need to bleed off altitude the best method is to start flying parallel to the landing zone in a figure-eight pattern. The trick is to always be facing the landing zone – never take your eyes off of it. Depending on your altitude and lift near the landing zone this could take 10-20 minutes.

Once you are at 100 feet, make your last turn into the landing zone and finalize your approach pattern.

Setting up for the final approach

So the final approach is what it sounds like – you enter the landing zone with enough altitude and turn to line up the centerline of the field adjusting for the wind direction. At this point, you need to transition your thinking to your body position, brakes, your flare timing to not face plant.

The following is a simple list of actions that need to be taken while you are on final approach to ensure a soft landing:

This is easier said than done. Expect your first flare and landing to be a hard landing. By hard landing, we mean, it was not a good flare and the timing was off, your distance from the ground was off, and you landed on your harness seat, not your feet.

The following are the ground handling techniques that you need to take after you have touched down:

The landing comes up on you fast, the pilot is struggling to get out of the harness and not in the upright position, looking for the brakes, bobbling the glider – at this point, the pilot has run out of time to dial in the precise moment for the landing flare.

A good flare starts long before the landing. As soon as you are at 100 feet and make your final turn down the landing zone, you need to be thinking about your flare. Typically, the closer to the ground the lighter the wind. Your vertical speed drops, your horizontal speed drops, flying becomes different as the ground looms upon you.

The best idea is to compress a series of steps into one large step. In one motion, get out of your harness and wrap your brakes and at the same time stabilize the glider. Start applying the brake. You don’t want to apply more than half brake pressure.

How to do a no wind landing

The best advice here depends on your situation. If you are moving fast, and have a long landing zone, use the speed to your advantage. Go hands up and let the paraglider fly on its own, be prepared to run fast, be super-human and flare hard when the time comes. You may pop up in the air about 10 feet, but that is considered a win and avoids a hard landing.

If you have a modern glider, apply brakes like in a sailplane and bleed off speed, but be prepared to run it out. Ease up on the brakes causing a slight swoop. You will ride up. Add more brake like a normal landing. When near the ground, go hard on your final flare.

How to do a downwind landing

Downwind landings, while ill-advised, never end pretty. They are very common when coastal ridge soaring. Luckily, no one gets hurt when pounding into the sand.

First, when flying downwind, you have to remember height is your friend. One turn, a loss of elevation, and you are on the ground. Make your last turn while you have the elevation.

You need to get your reaction timing up and be prepared to run it out. Get vertical in your harness.

You will need your feet under you and moving. You can try the swoop landing by flaring prematurely to get a pop upwards. Regardless, be hard on the flare. It’s all about the flare.

Bury the brakes and be prepared to be lurched forward from the wing passing over your head.

There are three types of slope landings. The uphill landing, the downhill landing, and the slope-side landing. Each can be tricky with some safer than others.

There are several things to consider when landing on slopes, such as the angle of the slope, varied ground cover, and obstacles.

The angle of the slope is important because it will affect how you approach and land on the slope. If the slope is too steep, you may not have enough time to make a safe landing, which could result in a crash.

With all slope side landings, you must land on the upwind leg. The wind is your friend, it slows your ground speed. You can crab until you are almost touching the ground, close to the stall point.

Remember to flare as your feet almost touch the ground, this allows you to kill the wing and any remaining momentum. It also keeps the wing from thrashing and re-inflating.

How to do a downhill landing

Landing downhill is like landing with the wind at your back. Your landing skills must be spot on. To achieve the best outcome, glide down the hill at as close to the ground as possible.

If you have room, extend your flight. Pick a safe landing spot. Tap the brakes if you are running out of room.

The looming effect will be even larger in this situation. You are close to the ground and it is quickly moving towards you. In reality, it is still a distance away. Be prepared for a hard flare and to run it out.

How to do an uphill landing

Uphill landings are the most dangerous landing types and should be avoided at all costs. If you have the option, you will fare better in your flight by trying a slope side landing.

With an uphill landing, you do not have a lot of speed retention that can be used to glide up parallel to the slope. If you you have to land uphill on a ski trail, opt for a quick turn and covert it to a slope side landing.

How to top land

Top landing is usually relegated to hills and coastal sites. By nature, these sites have the correct geographies and air flows to achieve a successful top landing. Dunes and hills have less rotor in the launch area, and that’s the best place to do your paragliding top landing. And, the wind is in the perfect direction.

First, start your paragliding flight by making turns over the launch area. See if you can maintain 100 feet above launch, then gradually dropdown. Get to the point where you can do a fly-by.

Once you are comfortable with the fly-by, try the touch-and-go. Practice these at least 30 times as gusts, and wind velocities in the compression zone constantly change.

Start your next paragliding landing by adding brake inputs. Use the butterfly technique as you approach the landing area. Tap on the brakes to descend. Tap more to increase your descent rate.

Once landed, begin ground handling. Quickly turn, grab your “C’s” and walk towards the wing to de-power the canopy.

Damien Mitchell is a USHPA Advanced Instructor, and APPi Trained Instructor. He has over 10,000 flights and has been instructing paragliders for 15-years. He has been flying for almost 25-years. He is originally from Utah.