How dangerous is paragliding? 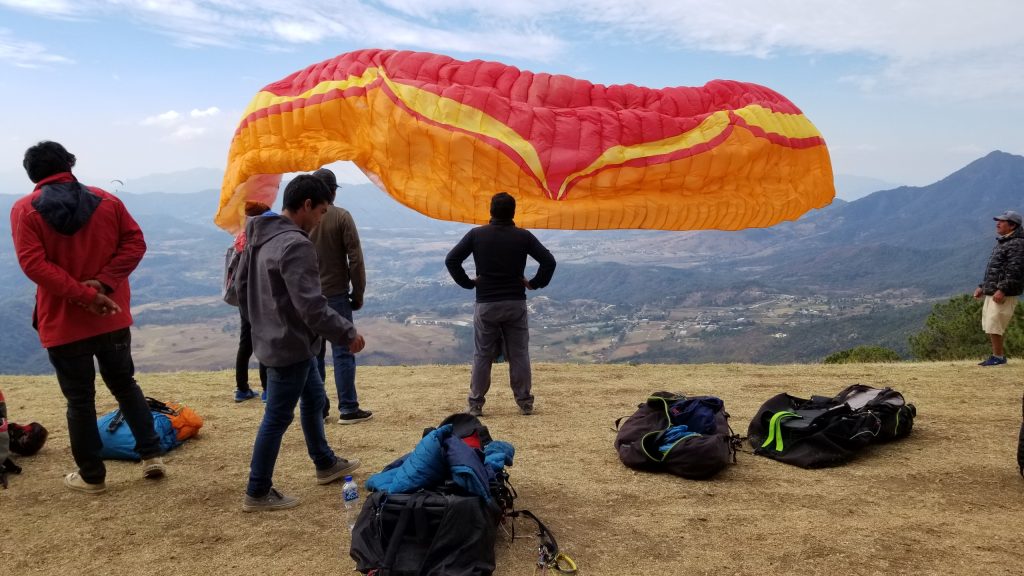 How dangerous is paragliding?

The short answer is paragliding is extremely safe when statistically compared to other sports like motorcycling. Paragliding is a popular sport, but there are risks. Without the proper training, things can go wrong, and sometimes people get injured. Like all aerial sports and extreme sports – hang gliding, and sky diving – you must take caution.

Despite these dangers, paragliding can be a lot of fun for its adrenaline rush. It’s important to take precautions to minimize the risk of injury or death. Make sure you are properly trained and only fly in good weather conditions.

In general, paragliding is considered a safe activity, but there are some risks involved. These include injuries from crashes, getting lost or stranded in remote areas, and exposure to bad weather.

Pilots should always take precautions to minimize these risks, such as checking the forecast before flying, using proper safety gear, and knowing their route well. With caution and care, paragliding can be an enjoyable and safe experience for everyone involved.

Paragliding accidents can happen at any time, but some times are riskier than others. Most accidents occur during takeoff or landing. It’s important to be aware of the risks and take precautions to stay safe while paragliding. Make sure you always have a spotter when taking off or landing, and be especially careful in gusty conditions. If something doesn’t feel right, don’t take the risk – abort the takeoff or landing and go back to the launch site.

Remember, more than 90% of injuries happen during the first ten flights a pilot makes.

It’s important to understand the risks before deciding whether or not to paraglide. Some of the dangers include:

How many paragliding accidents worldwide?

According to statistics from the World Health Organization, there were over 1,500 paragliding injuries worldwide in 2016. This number does not include unreported accidents, so the actual number is likely much higher. Paragliding accidents can be deadly and often result in serious injury or death.

Several things can cause a paragliding accident. Some of the most common paragliding injuries are caused by pilot error, equipment failure, and bad weather conditions.

Pilot error is the leading cause of paragliding accidents. Typically, it occurs when launching. This can also include making mistakes while soaring, landing, or not following proper procedures, or attempting maneuvers above your ratings.

Equipment failure is one of the least likely causes of accidents. This can include malfunctioning equipment or problems with the wing itself.

How risky is hang gliding?

According to a recent study, there were hang-gliding accidents worldwide last year that resulted in the deaths of at least 9 people and the injuries of at least 26 more. While this number is down from the previous year, it’s still far too many accidents.

The study found that the vast majority of hang glider accidents that occurred were pilot error, equipment failure, and wind conditions. These factors caused about two-thirds of all accidents. In addition, the majority of fatalities occur during the takeoff or landing phases of the flight.

What can be done to reduce these numbers? The study’s authors recommend better training for pilots and increased safety measures for pilots and passengers alike. Pilots should also be aware of the dangers posed by pre-frontal conditions and take steps to avoid them.

So, which is the safer option? Hang gliders or paragliders?

The answer to this question largely depends on the individual. While hang gliders are considered to be more stable in the air, paragliders are often seen as being more maneuverable. This means that a paraglider may be able to avoid obstacles more easily, but it also makes them less stable.

It is important to remember that these figures only relate to the United States, and that hang gliders and paragliders are both much more popular in Europe. Indeed, a study by the European Association (EHGPA) found that there were around 1,600 paragliding accidents in Europe between 2006 and 2010, resulting in around 100 fatalities. Comparatively, there were only around 100 hang glider accidents during the same period, with five fatalities.

What makes a good paragliding instructor?

This is a question that many people may ask, and there is no definitive answer. However, some important traits make an instructor good at this sport.

First and foremost, an instructor must be very knowledgeable about paragliding. Pick an experienced instructor – someone with over 10,000 flights. They need to know the principles of flight as well as the best techniques for launching and landing. In addition, an instructor should be experienced in piloting different types of paragliders in various conditions.

Second, instructors need to be patient, good listeners, and good teachers. Many beginners are nervous about paragliding and may need extra instruction and encouragement. An instructor who can provide clear instructions and help students feel confident will be more successful.

Finally, instructors need to be good role models. They should always fly safely and demonstrate good pilot etiquette. This will help students learn the right way to fly and avoid risky situations.

Another important thing to remember when paragliding is to always stay aware of your surroundings. Make sure that there are no obstacles in your path.

Tell me about paragliding safety precautions

When it comes to paragliding safety, it is important to take several precautions in order to ensure a safe and enjoyable experience. First and foremost, always consult with a qualified instructor before embarking on a paragliding lesson. They will be able to provide you with the necessary instruction and precautions to follow while paragliding. A license from the paragliding association, USHPA, is needed to fly most of the popular launch sites in the U.S. and abroad.

In addition, make sure that you are aware of the weather conditions before your paragliding flight. A light breeze can quickly turn into a powerful gust, so never paraglide if the wind speed is too high. Also, be aware of your surroundings; avoid launching from cliffs, snow, or other sketchy areas.

Accidents happen. Always wear a helmet and other safety gear when paragliding. In the event of a fall, or a botched launch, this gear can help protect you from serious injury. Finally, never paraglide alone. Always fly with other paraglider pilots who can help ensure your safety.

What not to do to remain safe

This is a question that many people have, and it’s a valid one. After all, paragliding is not a sport that is without risk. However, when done properly, paragliding is quite safe.

What is intermediate syndrome?

Intermediate syndrome is a condition that can affect paraglider pilots. It occurs when a paraglider is no longer considered a beginner, but has not yet mastered all the skills needed to fly safely. This can lead to dangerous situations, as the pilot may be unaware of the risks involved in flying at this level.

There are several things pilots can do to help avoid intermediate syndrome and stay safe while soaring. First, always fly with an experienced pilot who can help guide you through the more challenging aspects of paragliding. Secondly, never try new maneuvers or techniques without first practicing them in safe landing areas. Finally, always make sure you are familiar with the weather conditions before flying and be prepared to cancel your flight if the weather is not favorable.

Having a false sense of safety can be a dangerous condition, but by following these tips, pilots can help stay safe while flying and help you avoid a hard landing.

This article was written by an experienced paraglider pilot to help other pilots stay safe while flying. Always fly safely and responsibly, and never attempt any maneuvers you are not confident with.

Is there a backup if the wing fails?

When it comes to paragliding, most people think of swooping through the skies with nothing more than a piece of cloth between them and a long fall to the ground. In reality, though, paragliders use parachutes to stay safe in case something goes wrong.

All three types of parachutes are packed into a container called a paraglider pack. This pack is attached to the paraglider pilot’s body and allows them to deploy their parachutes quickly in case of an emergency. Pilots typically carry two parachutes: a main parachute and a reserve parachute. They also carry an emergency parachute as a last resort.

While not all pilots carry three reserves, many pilots do – those doing powered paragliding, acrobatics, or giving tandem flights.

What’s another external factor I should think about?

When paragliding, there are a few external factors to consider for safe flying. Other than wind conditions, pilots need to be aware of obstacles in the landing area. This could be rocks, trees, power lines, spectators, or farmers with shotguns.

One other important factor to think about is weather that day. Are other pilots experiencing collapses, throwing reserves, hitting their bump tolerance limits? Pilots should always check with other pilots before embarking on a flight. Get on the radio and get the conditions in the air and at the landing zone.

What type of injuries caused?

Paragliding can be a fun and exhilarating experience, but it is also a sport that can result in serious injuries. Some of the most common injuries associated with paragliding include:

The severity of these injuries can vary significantly, depending on the circumstances involved. For example, a minor cut or bruise might not be cause for concern, but a serious head injury could lead to long-term health problems. It is important to be aware of the risks associated with paragliding and to take steps to minimize the chances of experiencing an injury.

I’m worried about take off?

It is important to be aware of the risks associated with paragliding takeoff and to take all necessary precautions to minimize the chance of injury. Anyone who is considering paragliding should speak to a doctor or other healthcare professional beforehand to find out if it is safe for them to participate.

Head injuries are a particular concern, as they can be very serious. Concussions and skull fractures, while infrequent, are common injuries, and they can lead to long-term health problems or even death.

Spinal cord injuries can also be serious and can result in partial or complete paralysis. They often require extensive rehabilitation treatment.

Damien Mitchell is a USHPA Advanced Instructor, and APPi Trained Instructor. He has over 10,000 flights and has been instructing paragliders for 15-years. He has been flying for almost 25-years. He is originally from Utah.